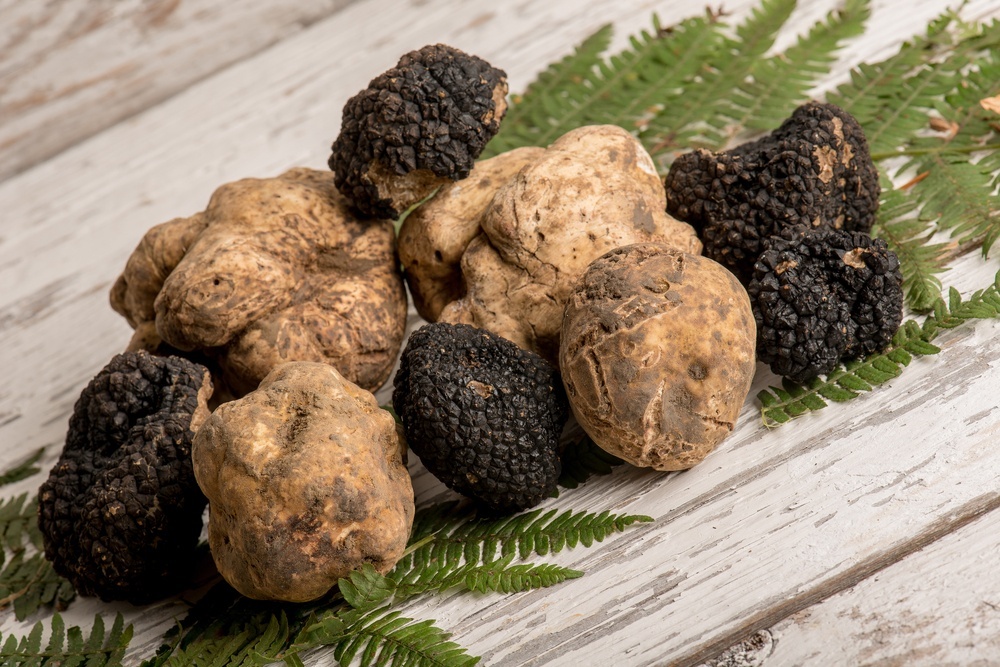 The name truffle is a collective term for a large number of underground mushrooms that are valuable spices and gastronomic specialties in relation to their use.

Truffles are mysterious, legendary organisms that come to mind as an aphrodisiac to some, although the longing effects of the truffle have not been clearly proven. According to an Italian proverb: "If you want to lead a moral and virtuous life, you should not taste the truffles". According to legend, deer gain new strength from this species of mushroom in September and October before mating.

Truffles have been very popular and valuable types of mushrooms since ancient times until today because of their legendary strong stimulating effect. Despite their notoriety, truffles are also a spice, the value of which determines the aroma rather than the quantity.

The word truffle comes from the French "truffe", which comes from the Middle French word "trufle" and ultimately from the Latin word "tuber" ("tuber"). Truffle is a spice, a gastronomic specialty that doesn't taste like anything. Giacomo Casanova often ate truffle ragout before his love adventures. The famous Casanova sauce named after him is made from 30 grams of truffles. According to senior writer Alexandre Dumas, "truffles make ladies gentler and men more lovable". The French chef Jean Anthelme Brillat-Savarin from the 18th century called the “diamond of the kitchen”, while the Italian gourmet composer Gioachino Rossini called the truffle the “Mozart of mushrooms”. It seems like "we would eat a scent, but the scent that we perceive with our tongues is not the same as that which we previously perceived with our nose".

The Sumerians in Mesopotamia already used it for their food. Ancient scientists and philosophers debated a lot about the nature, shape and nature of truffles. According to the Greek philosopher Theophrastus, the “father of botany,” the truffle is created by the interaction of autumn rains and lightning. Desert truffles belonging to the genus Terfezia had to be transported from the Phoenician to the ancient Roman Empire, where the most special delicacy and aphrodisiac at the feasts of Lucullus was the Phoenician white truffle. But desert truffles also came into Roman cuisine from northern Africa.

The first Hungarian royal mention comes from 1395 in the so-called Beszterce Dictionary. In France, truffle dishes were popularized by Italian chefs in 1547 when Henrik II and Katalin Medici married, who arrived at the French royal court.

During the Austro-Hungarian Monarchy, the truffle trade and truffle gastronomy, formerly known as the enjoyment of "Trifla", flourished. The favorite soup of the Austrian Emperor Franz Joseph and the Hungarian King was the truffle Jerusalem artichoke soup and used by Empress Maria Theresa's kitchen as a spice for chicken dishes

Burgundy truffle (Tuber uncinatum) - from 15 May to 31 December

Summer truffles (Tuber aestivum Vittad.) - from 15 May to 31 December

It is the most common of Central European truffle species. Their size varies from hazelnuts to apples. The exterior is black, rough, the interior is marbled yellowish-white on a ripe brown background. Its aroma is reminiscent of cooked corn. The high season runs from July to December. It is found in deciduous forests under oaks, hornbeams, black pines, hazelnuts and linden trees.

Burgundy truffles are very similar to the summer truffles, so some consider them a variant of summer truffle. They weigh from 5 to 200 grams and are generally 5 to 15 cm in diameter. They grow from September to January under oak, linden, poplar, willow, hornbeam and hazelnut.

Truffles are the most popular in French cuisine. Their surface is covered with more or less flat, four- or six-sided, pyramidal warts. Their outer side is initially reddish brown and later black. They weigh 8-200 grams and are usually 5-10 cm in diameter. They are grown under oak, linden, hazelnut, black hornbeam from December to March.

A truffle with a white, marbled interior and a mushroom-like scent, and can even be the size of an apple. In many ways it is a curiosity: The only sweet-tasting truffle that is mainly found in acacia forests in Hungary. But cannot be found in the original habitat of the tree, in North America. It can be collected in early autumn.

These truffles are yellowish-red-brown on the outside, their ripe inner part is brown. It comes in very different sizes and shapes. Its aroma is unmistakable and reminiscent of garlic. You can find them mainly in Italy and the Balkans. It grows under English oak and white poplar from October to December.

A truffle, decorated with tiny, smooth toads on a brown background, is rarely larger than an egg. The inside is veined yellowish-white on a brown background, with a characteristic aroma reminiscent of garlic. In autumn, it can be picked in hornbeam, oak and linden forests, where the soil is moist enough for them.

It is an extremely black truffle with whitish veins on the inside on a gray background. Its aroma is very characteristic and resembles that of the French truffle. Their size is usually small, growing to the size of a walnut. Beautiful ripe truffles can be collected in winter, especially from January to March, but they will also appear in September. Similar to summer truffle, it grows under oak, hornbeam, linden and hazelnuts.